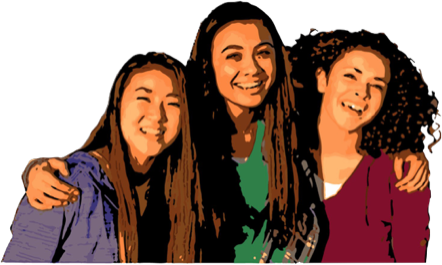 What Is Club and Camp Ophelia?

If you dropped in on Club or Camp Ophelia, it might seem like middle school girls (grades 6–8) are just having fun hanging out with each other, working on crafts, and spending time with high school mentors. In reality, every activity girls are involved in through club and camp is designed to teach something about relationships.

The approach is simple. First we EDUCATE about relational aggression using stories that illustrate female bullying. Girls then share bullying situations from their own lives, and create role plays that act out the hurtful behaviors they have seen or been involved in.

Until this point, many girls simply don’t realize how much their actions can harm others—even the simplest things like spreading a rumor or refusing to talk to someone. Seeing role plays shows girls who is involved in relational aggression, what is involved, and where it can happen.

The next step is having girls RELATE the information on relational aggression to their own lives. We do this by examining the relationships they have or want to develop, looking at what makes someone a friend, and discussing what qualities each girl brings into her relationships with peers.

We also stress that in any situation there are always choices. Again and again, girls are asked to identify alternatives they would feel comfortable using in bullying situations. During this time, we shift the focus of the role plays, and ask each group of girls to “replay” their original situations using two alternative endings that show a positive outcome.

Sometimes, the mentors and directors challenge the replay alternatives girls come up with and ask if they are realistic. For example, girls admit that in real life it would be very unusual to make up quickly with someone who has bullied you. Instead, getting adults involved, having bystanders intervene to help, offering an apology, or walking away are alternatives girls say they would really use.

In the final part of the program, girls are asked to INTEGRATE what they have learned into their lives, and to think about how they could help another girl who is a victim or a bully.

In 2006, a junior version of Club Ophelia was piloted and evaluated. The program was such a success with girls in elementary school that it has quickly grown and now helps hundreds of fourth- and fifth-grade girls learn healthy relationship skills!